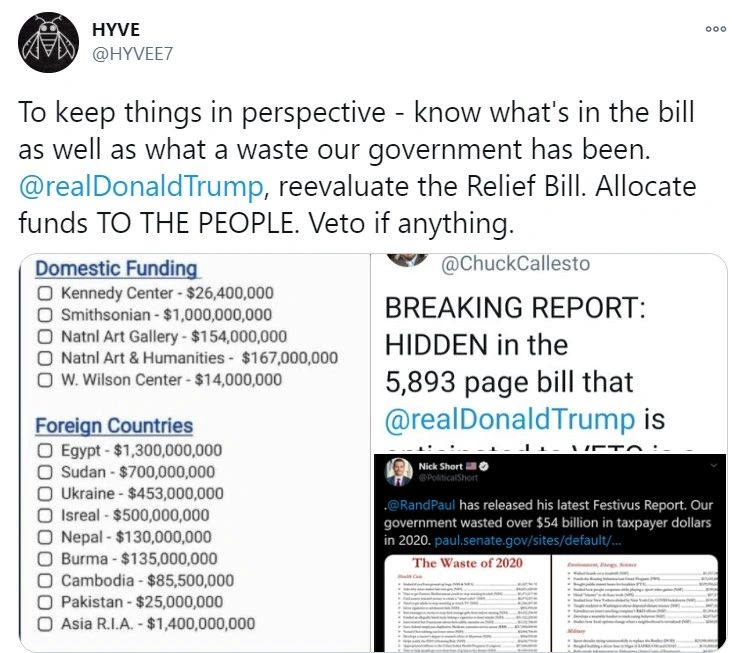 This video got both accounts removed and these two anons fought hard to get this message out!  It’s saved on YouTube.

Lawmakers on Both Sides Block Changes to CCP Virus Bill

Lawmakers on Both Sides Block Changes to CCP Virus Bill

There were multiple attempts on Thursday from both Republicans and Democrats in the House of Representatives to amend the pandemic aid and government spending package, after President Donald Trump’s surprise demand for more stimulus money for U.S. citizens.

One of Trump’s requests was to increase direct payments to Americans from $600 to $2,000 per person, which Democrats attempted to approve on Thursday. Republicans who opposed the higher amount blocked that effort.

Republicans then moved to change the amount of foreign aid included in the package, but Democrats ended up blocking that request as well. Trump, in his announcement, had objected to the millions in foreign aid. The House then adjourned for the day.

It comes after House Minority Leader Kevin McCarthy (R-Calif.) wrote to his colleagues on Wednesday night that Republicans would offer a unanimous consent request to “reexamine how our tax dollars are spent overseas while so many of our neighbors at home are struggling to make ends meet.”

“House Democrats appear to be suffering from selective hearing. They have conveniently ignored the concerns expressed by the president, and shared by our constituents … It will be up to Speaker [Nancy] Pelosi to decide if she wants to act on behalf of the American people,” McCarthy wrote.

The activity on Thursday did nothing to change the status of the $2.3 trillion omnibus spending bill, which is now in limbo.

House Speaker Nancy Pelosi (D-Calif.) said the chamber will hold a recorded vote on the stimulus check increase next Monday.

McCarthy and Pelosi’s office did not respond to requests for comment after the House adjourned on Thursday.

Trump didn’t use the word “veto” in his earlier statement, but all but implied he would block the bill unless Congress removed billions in spending allocated to foreign nations and domestic institutions unrelated to the battle against the CCP (Chinese Communist Party) virus, commonly known as the novel coronavirus.

Top Democrats quickly took up Trump’s offer. Pelosi has urged Republicans to pass a standalone measure for the $2,000 payments in a unanimous consent vote on Christmas Eve. She made no mention of the foreign spending that Trump criticized, including $10 million for gender programs in Pakistan. Senate Minority Leader Chuck Schumer (D-N.Y.) urged the president to convince Republicans to approve the measure.

The timing of the bill’s passage gives Trump the option of letting the bill fail without issuing an actual veto. The Constitution provides for a so-called pocket veto in the event that Congress adjourns during the 10 days following the passage of a bill. With Sundays excluded and Congress set to adjourn on Jan. 3, Trump has the option of letting the bill terminate without setting pen to paper.

Ivan Pentchoukov and Reuters contributed to this report.