Skip to content
Research has suggested that we are wired with spiritual brains and how meditative prayers actually changes the brain. Dr. Andrew Newberg is a neuroscientist who studies the relationship between brain function and various mental states. His research suggests we have spiritual brains, with a

But there’s even a more profound spiritual discovery. There is an advanced spiritual practice investigated by Father Francis Tiso, author of Rainbow Body and Resurrection. He investigated a specific case of 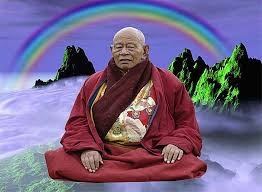 the Tibetan Buddhist, Khenpo A Cho and his practice of the “Rainbow Body, “. In 1992 and at the age of 74, Cho devoted himself to retreat practices. It was reported he  recited more than 400 million of the mani-mantra and  recited and promoted recitation of the Long Life Prayer of the Protector of the Snow Ranges and the Heart prayer of the Enlightened Activities related to his holiness the Dalai Lama and Avalokiteshvara.

In 1997, the day before his death, Khenpo responded to young and old people of his entourage with great pleasure and without hurry he gave instructions on what is to be done in the future. The next day he ate very little, showed no signs of bodily sickness or fatigue. At noon, he laid on his right side, turned his head to the north and face to the west, reciting the six-syllable Mantra, Om mani padme hum, and died.

According to Father Tiso, his face immediately became youthful, smooth and pinkish all signs aging disappeared. A fragrance smell was not only around the body but outside the house. Above the house five colored rainbow lasted for days witness by many including monks and father Tiso. Father Tiso also reported the afternoon of the day of his death, just before dark, a light similar to that of sun rays was shining for a long time from the east.

smaller. On the seventh day there was manifested the stainless rainbow body the viajar body.

Other reports regarding the rainbow body state that when a person dies, rainbows suddenly appeared in the sky and after several days their bodies disappeared. Sometimes fingernails and hair were left. Sometimes nothing was left.

Father Tiso discusses his research and investigation of the Rainbow Body.  Some believe these stories reflect the resurrection of Jesus Christ. A rainbow light has been witnessed by thousands of people

after death. Attaining ‘rainbow body’ is discussed in Zen texts, as well as Zoroastrian, Christian, Manichean, Muslim, Bonpo, and of course, Vedic texts, among others. Attaining the ‘light body’ is for everyone with ample proof that it exists now and in ancient times. Jesus said in Matthew 6:22 “The eye is the lamp of the body. If your eyes are healthy, your whole body will be full of light” This all appears to be related to our Chakras.

Early Christianity known as the Gnostics, spoke of a Divine spark

within each of us.   Jesus said in the   Gospel of Thomas, “Images are visible to people, but the light within them is hidden in the image of the Fathers light. He will be disclosed, but his image is hidden by his light.”

Law of One was  a channelling event that occurred from 1981 to 1984. The questions were from L/L Research and the answers were from a Social memory Complex from the sixth  density or dimension named RA.    The Law of One questions and answers are available free online.

In session 1.0  RA states;  We have watched your group. We have been called to your group, for you have a need for the diversity of experiences in channeling which go with a more intensive, or as you might call it, advanced

approach to the system of studying the patterns of the illusions of your body, your mind, and your spirit, which you call seeking the truth. We hope to offer you a somewhat different slant upon the information which is always and ever the same.

Another question and answer provides a wealth of information  to the seeker.

Session 10:14  Questioner: could you state some of the practices or

exercises to perform to produce an acceleration toward the Law of One?

Ra: I am Ra.
Exercise One. This is the most nearly centered and usable within your illusion complex. The moment contains love. That is the lesson/goal of this illusion or density. The exercise is to consciously seek that love in awareness and understanding-distortions. The first attempt is the cornerstone. Upon this choosing rests the remainder of the life-experience of an entity. The second seeking of love within the moment begins the

addition. The third seeking powers the second, the fourth powering or doubling the third. As with the previous type of empowerment, there will be some loss of power due to flaws within the seeking in the distortion of insincerity. However, the conscious statement of self to self of the desire to seek love is so central an act of will that, as before, the loss of power due to this friction is inconsequential.

The foundation or prerequisite of these exercises is a predilection towards what may be called meditation, contemplation, or prayer. With this attitude, these exercises can be processed. Without it, the data will not sink down into the roots of the tree of mind, thus enabling and ennobling the body and touching the spirit.

Love, vibrations, frequency, chakras and rainbow body seems to be connected.   There has never been a time like today. The world is at our fingertips to explore and discover who we truly are and the power within. Looking  within is where you will find all your answers.