The Law of One takes you on a spiritual adventure revealing our purpose of existence and the consequences of our behavior.  It shares the same concepts we learned from our religious systems today.  It is about the human race and our past, present and a glimpse into the future. It has been said this  is “One of the most important spiritual documents since Jesus”.  Simply stated, it is about love, light, wisdom, free-will and seeking the truth.

Some may say it is a hoax, but the complexity of the responses, which are so masterfully and skillfully crafted, no human could possibly have the knowledge or ability to create the responses. The fundamental idea  in The Law of One,  is there is only one, and that one is the Infinite Creator. The Contact was made with the three members of the L/L research, Don Elkins, a former Physics Professor and Airline pilot, Carla Rueckert, a devoted Christian; , and James McCarty, the sole survivor today. The contact was made by an advanced extraterrestrial from the 6th dimension. The contact was made so the group could ask questions and answers were given. The group recorded and documented over 2360 questions and answers in 106 sessions from 1981 to 1984. Answers were given in a scientific and metaphysical vocabulary.  It is available for anyone with the will and desire to study the advanced spiritual teachings.  Not only does the Law of One provide spiritual insight but it may also provide a better understanding of the world we live in today.  Regardless of your beliefs or religion, the Law of One resonates with religions and beliefs systems worldwide.

In the the first contact, the entity named RA, the humble messenger of the Law of One message was simply put, is the Law of One is the Universal Truth that “All Is One.”  Each session opens with, “I am Ra.  I greet you in the love and the light of our Infinite Creator”  and closes with, “I am Ra.  I leave you in the glory and the peace of the One Creator.  Rejoice in the love/light, and go forth in the power of the One Creator.  In joy, we leave you.  Adonai.” 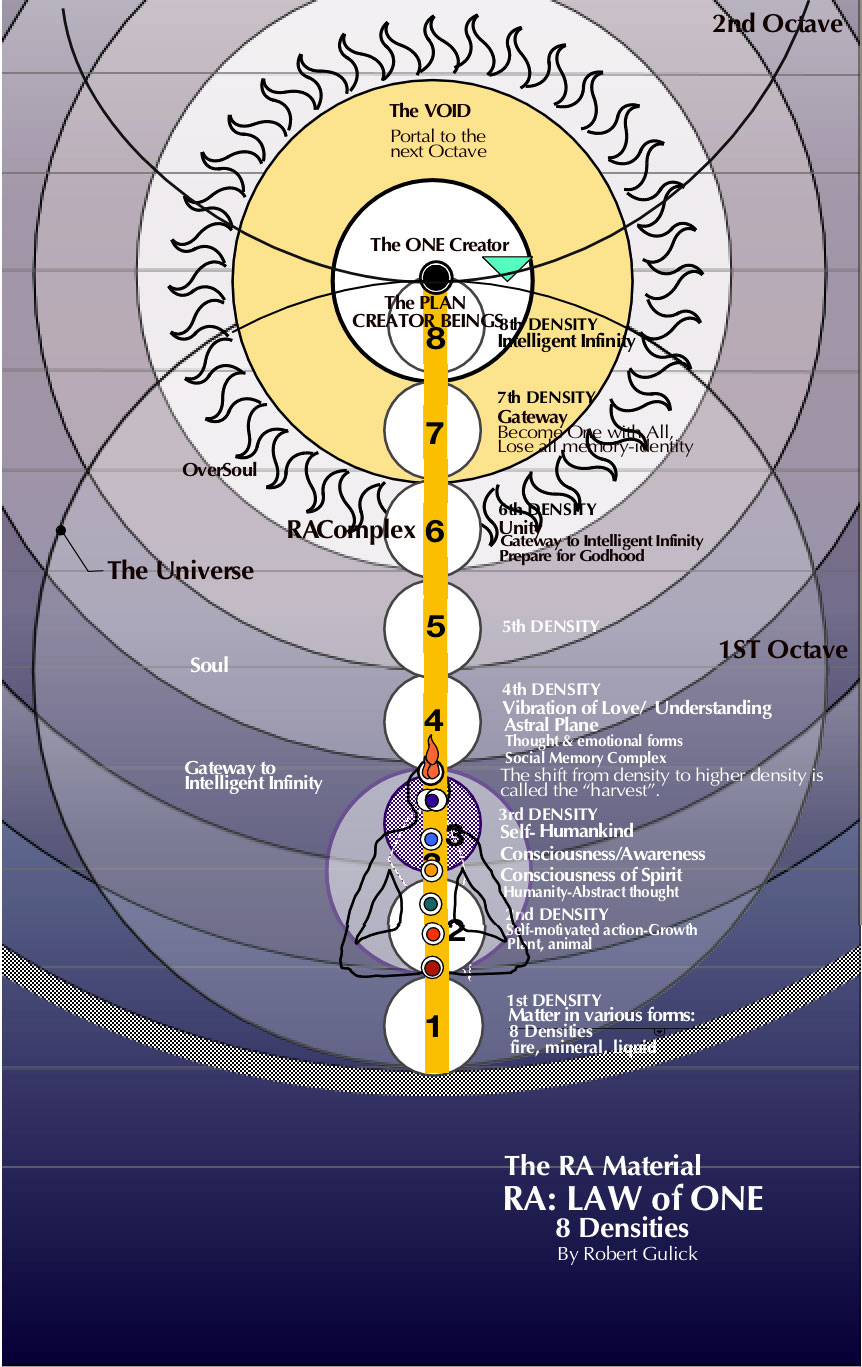 The Law of One is the comprehension that all things are made of intelligent energy and are a part of the All-One. The Law of One is a Sacred Science of the mechanics of Christ Consciousness and are the Natural Laws governing our Universal Creation.

Others provide their insight:

W. T. Samsel  wrote “ These aspects of the One Law hold true, no matter if you are a Hindu, Muslim, Christian or Jew.  It doesn’t matter what religion you practice, because we are all differing expressions, and these are merely differing avenues that lead to the same source.”

Time Spiral wrote “It is remarkably fascinating, and interesting, and if you are dubious—like me—perhaps you could be intellectually stimulated by the material.”

True_George  stated “In session 8 there were direct references to the United States government and the technology that was in their possession at that point in time and the existence of the secret space program (SSP).   Now, in the 1980’s the technology and the governmental activities sounded far fetch but now thanks to insiders and whistleblowers a lot of that information is coming to light.”

Article by Doug Esse MA,MSW,LCSW: Comogenesis and the Law of One

In Session 8.7 RA speaks of a particle beam which polarizes the Earth Sphere. No one knew of the Experiments with the HAARP Ionospheric Heater in 1981. In session 8.27, RA also spoke of unmanned crafts which we know as drones today. That information was not readily available to the public in 1981.

For me, The Law of One provides insight on something that happened j

ust 38 years earlier, when thirteen ancient books, called “codices,” containing over fifty texts, was discovered in upper Egypt in 1945.  Known as the Nag Hammadi Scriptures, scriptures such as the Gospel of Thomas, the Gospel of Philip, and the Gospel of Truth which were thought to be destroyed by early Christianity.  The texts were translated in the 1970’s but our language barriers and time have given us sacred texts that may have been misunderstood.

To put “All is One” into perspective, Jesus says in John 17:21 that “they all may be one; as thou, Father, art in me, and I in thee, that they also may be one in us: that the world may believe that thou hast sent me.”  Also, Lao Tzu said in the Tao Te Ching, “to be united with the Tao is to be one.  To be One is to Live forever.  Even though the body dissolves the person who is one is safe.”

Another curious point in the Gospel of Thomas occurs when Jesus said, “Let him who seeks continue seeking until he finds.  When he finds, he will become troubled.  When he becomes troubled, he will be astonished, and he will rule over the All.”

In verse 50  in the Gospel of Thomas  Jesus also said  “If they say to you, ‘Where did you come from?’, say to them, ‘We came from the light, the place where the light came into being on its own accord and established itself and became manifest through their image.’ If they say to you, ‘Is it you?’, say, ‘We are its children, we are the elect of the living father.’ If they ask you, ‘What is the sign of your father in you?’, say to them, ‘It is movement and repose.'” The Law of One provides so much insight to the  Gospel of Thomas.

Was RA continuing the message as others have in the past  be in terms we could understand?  Is it a coincidence that we live in a time where communication and information is instant.  Was the discovery of the ancient texts and the RA contact a divine plan?  Is it coincidence that you can get the world’s sacred texts at your fingertips?  Only the seeker can answer those deep questions.

The Law of One transcript, with search options, is available for free.  Scott Mandelker PhD, is an excellent teacher and his understanding and reading  for the  complete Law of One series  is available on YouTube.  In Session 90 (2)  he said this material is “One of the most important spiritual documents since Jesus”.

It is also interesting to note that the law of One in session 11:18  he spoke of mind control like the Main stream media is doing to the masses as of 5/8/2020.

11.18 ▶ Questioner: Then we have crusaders from Orion coming to this planet for mind control purposes. How do they do this?

Ra: I am Ra. As all, they follow the Law of One observing free will. Contact is made with those who call. Those then upon the planetary sphere act much as do you to disseminate the attitudes and philosophy of their particular understanding of the Law of One which is service to self. These become the elite. Through these, the attempt begins to create a condition whereby the remainder of the planetary entities are enslaved by their free will.

Spirituality is infinite consciousness and all that is – It is God